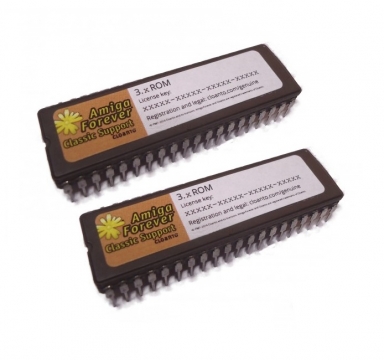 You should replace your old modules with new ones. All ROMS has a different serial number released by Cloanto.

System Requirements: The 3.X ROMs have a size of 512 KB, and are therefore compatible with all Amiga models except for the Amiga 1000. In order to make room for the enhancements, the 3.X ROMs employ the same technique used by Commodore for the 4000T ROMs, i.e. ROM space was freed by moving workbench.library out of the ROM. This means that a "Libs/workbench.library" file must be present on the boot disk, as detailed below.

Support for Disks Larger than 4 GB

The scsi.device updates included in the 3.X ROM make it possible to boot from disks larger than 4 GB. Additional elements, such as FastFileSystem 45.9 and Installer 44.10, are included in the Classic Support Workbench 3.1 distribution, and complement the ROM-based enhancements. For maximum compatibility, the Amiga boot partition should be the first partition of a disk, and it should not be larger than 4 GB. In order to remain compatible with older software that uses 32-bit values to measure disk capacity, a maximum partition size of 2 GB is recommended. Required "workbench.library": Because workbench.library is not part of 3.X ROMs, a "Libs/workbench.library" file, as included in the Classic Support Workbench 3.1 set by Cloanto, must be present on the boot disk. This requirement is in common with later 3.1 ROMs by Commodore and ESCOM, as used with the Amiga 4000T model. "Startup-Sequence" Modification: Older versions of the SetPatch command may not have been designed for use in combination with newer ROMs, and thus may fail to work properly with 3.X ROMs.

In these cases, a change is required in order to detect and avoid patching 3.X ROMs. The SetPatch command itself is still required, as on the original Amiga ROMs, in order for example to enable AGA chipset features. Edit S/Startup-Sequence as follows: