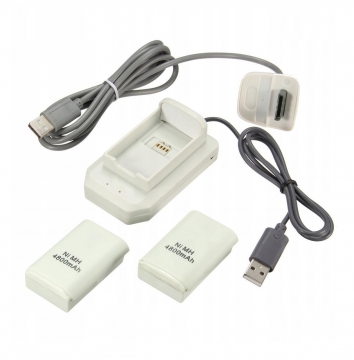 Docking station - USB charger - Play & Charge for batteries from Microsoft XBOX 360 controllers. The package also includes 2 spare batteries for the pads! Necessary set, thanks to which you will save time on recharging the batteries! Thanks to the Play & Charge cable you will no longer have to stop playing and wait for your cells to be charged!

- 2 spare batteries with a capacity of 4800 mAh included.

- Microprocessor charger dedicated to the battery of Microsoft XBOX 360 controllers.

- The station is compatible with all types of batteries for wireless pads from XBOX 360.

- The charging process is fully automatic thanks to the built-in microprocessor that controls the state of charge of the battery. After being fully charged, the microprocessor automatically changes the operating mode to keep charging, an additional circuit protects the batteries against overcharging.

- Charges 1 battery in less than 2 hours!

- the station can be placed on a desk or on a shelf next to your XBOX 360 console.

- It allows you to play and charge the battery at the same time after placing it in the pad (using the Play & Charge cable).

- The possibility of charging with a USB cable after placing them in the charging station.

- 2 spare batteries with a capacity of 4800 mAh included!